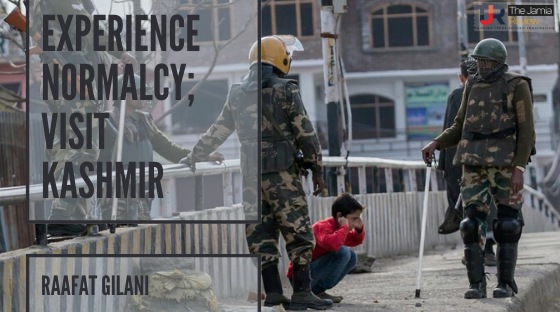 It has been more than five months of lockdown in Kashmir, these days you see the showcasing of less and less protests, stone-pelting, militancy and civil disobedience in media. So, has Kashmir finally achieved a state of normalcy?

One of the most prevalent fossils of Kashmir, that apparently show what Kashmir was before the abrogation of 370, includes it being bigoted, misogynistic, casteist, homophobic and xenophobic etcetera. A Kashmir that burns schools, attends the funeral of “terrorists”, that ethnically cleansed the Pandits, waves Pakistani flags and the list goes on. All of this is based on the idea that the “special status” (Article 370 & 35a) were the catalysts in the concoction-witch-pot. Media can’t get enough of the “developments” that are going to happen in J&K now and the introduction of IPC and reservations. This idea is dangerous; when people start to think that their idea of the world is the one supreme, is how dictators come into power, how Holocausts and Gulags are inspired. The dictions mentioned do exist in J&K, although it’s just the surface of the ocean. The “terrorists” are seen as martyrs in Kashmir, so in that sense they are nationalists in their own confined way, this is in no way justification of either but the reasoning that is always looked over. For example, if Kashmir is homophobic and isn’t now after the abrogation, then so was rest of India till September 2018 and then magically now isn’t, which we know is absurd. Even if it was about changing law for the favoring of such sects of the society, those laws very well could’ve been incorporated into the constitution of Kashmir, as was done before. Still, laws don’t change minds, they restrict, for good or bad, changing laws is for sure an opening but not the entire road.

The normal of Kashmir was “martyrs”, “oppression”, “human right violations”, “shutdown of internet”, “PSA” and all which still remain, and the expectation of change in correlation of time is a utopian diction, there is change without procedure and the Government has always used terms like “security review”, “appropriate measures” to cover the answers with diversion, and anything, almost anything “they” think is viable can be done under this blanket. Hitler once “assured” the Jews that the Nuremberg Law won’t affect them. How twisted the play of words with legalities can become was made clear by Martin Luther King when he said, “We should never forget that everything Hitler did was ‘legal’ and everything the Hungarian freedom fighters did was ‘illegal’.”

“Normalcy” is all what the law is made to mould a condition to, in Kashmir some say was all what is aforementioned and now the normal has changed or will change and for some after five months of shutdown the UT is now normal. People have to live their lives, they obviously can’t shut their shops forever, they can’t not go to schools forever, they can’t not abide by the laws used to control them forever (because then facilities are shutdown) and the Government knows this. So, if normal is what can be changed as one pleases it to be, the question becomes not if everything is under “normalcy” in Kashmir but if there’s anything at all against it.

This site uses Akismet to reduce spam. Learn how your comment data is processed.